Style: Alternative (Can vary over his mood)

Hair colour: Dark brown (It looks black unless you look at it in the light)

Simon Kohler is a new nightguard for the new and improved Fazbear's Fright. He's a pretty silly guy and normally isn't the first to be scared but when he is there's a good reason for it (i.e. The phantoms scare the hell out of him, though Springtrap is nice to him). He loves working with technology he's such a nerd and robots makes him fangirl internally. He's very kind and caring, but if you tick him off, he'll ignore you forever (if you attempt to talk to him he'll be short and/or most likely kill you if you try to do more things).

Simon came from a household of a happily divorced mother and a younger brother by four years, Tan. His father was physically abusive and was an alcoholic, knocking Simon and Tan off into a wall. Tan Kohler, coincidentally, is the reincarnation of the dead child who possessed Chica the Chicken, after he was released from the animatronic being scrapped. Simon decided to be the nightguard of the horror attraction because he thought it would be a challenge and his brother pretty much forced him to work there, since he knew he was searching for a job and everything.

He's in a relationship with two people; the first is named Daniel, a graysexual/demiromantic male who's known Simon since the 8th grade (7th for Daniel) The second is named April (character owned by Rainbow); a demisexual female who owns the attraction after the previous boss sold it to her. They both know about each other and they do get jealous over Simon's love for the other, but in the end all three of them are happy with each other's company (most of the time).

Any enemies, you ask? Well he does have at least four and that is Daniel's parents, April's father, and even his own father. He hates most parents though, it's nothing big. However, Daniel's and April's fathers and him do not need to be around each other. Simon will, I repeat, will, end up killing them both right then and there because of stuff that has happened. 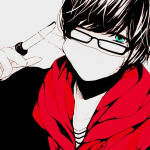 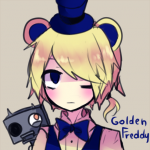